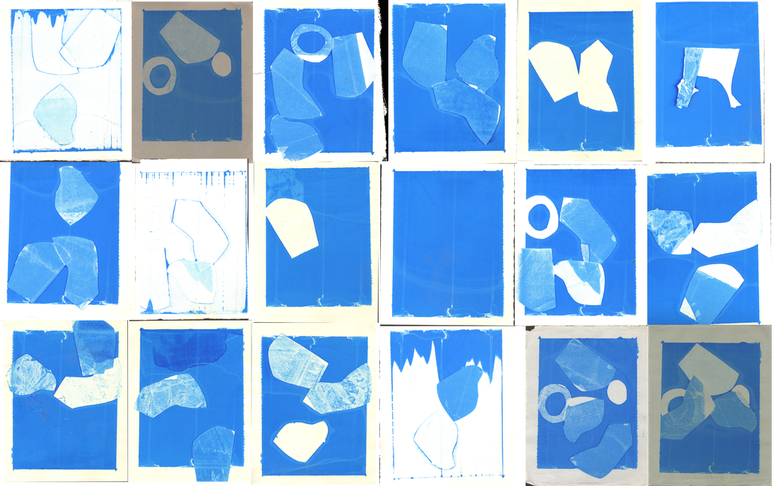 Wars In Space Will Kill Us All, 2016 18 Sheets, Screen Print, Dimensions Variable 36" X 54"
Michael Stevenson (Baltimore, MD) works in paint, printmaking, music and theater. Currently his interests lie in the role of memory and experience, the truth found in the body versus arguments constructed in the mind, the need to act even when faced with incomplete or missing information.Images convey many messages on many levels. He studied art at Concordia University in Montreal, getting his BFA in painting, as well as at the University of Quebec at Montreal and the Hochschule der Kunst in Berlin. While pursuing his BFA, he also started a post-hardcore band that toured North America as well as releasing several albums, over the course of several years.

In Tempe, Arizona, Stevenson completed his MFA in painting and printmaking while working on an MA in Art History, focusing on native Mexican indian manuscript traditions over the period of the conquest. He is a recent recipient of the Pollock Krasner Award, received a Full Fellowship at the Vermont Studio Center and was an Affiliate Artist at the Headlands Center for the Arts. He has started and run community-based printmaking studios. At present, runs a tri-yearly salon out of his house, encouraging the exchange of ideas and opinions in the local art community. His work can be found in public and private collections in North America and Europe.

1078 Gallery is supported by our members, volunteers, donations, and programming.  Please visit our support page
​for membership and donation options.  All text, images and web pages at 1078gallery.org are copyright 1078 Gallery unless otherwise noted.
E-mail the web team at info@1078gallery.org.   ©2008–2022 • 1078 Gallery — All Rights Reserved.