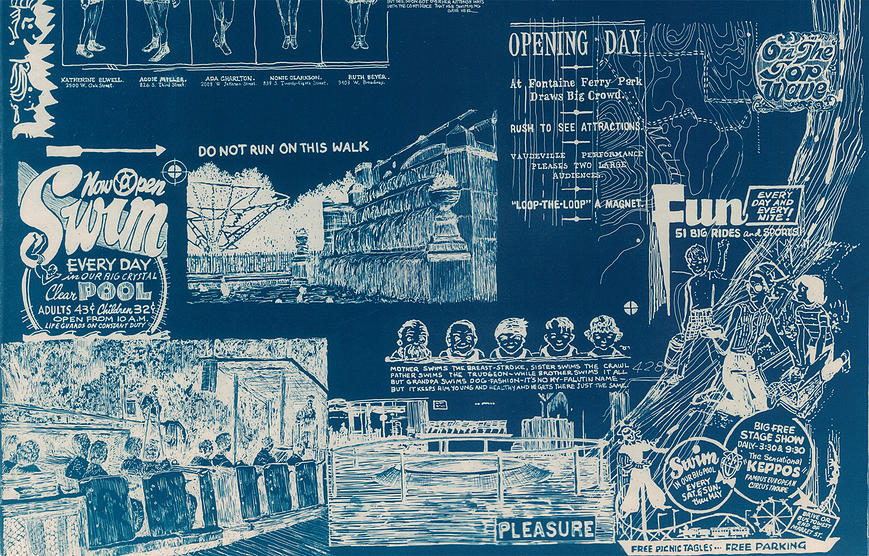 From the series Breaking the Loop [The Loop], 2015 (cyanotype)
Susanna Crum is Assistant Professor of Fine Art-Printmaking at Indiana University Southeast in New Albany, IN. She received her MA and MFA in printmaking from the University of Iowa and her BFA in printmaking from Cornell University. For her exhibit A Collecting Place, she writes:
​
​The camera obscura operates on the principle of the eye, in which a lens projects an image of the outside world into a dark room. In the 5th-century BC, Chinese philosopher Mo-Ti described the camera obscura as “a collecting place,” as it gathered light rays through an aperture. My multimedia, research-based projects also build on an impulse to collect and examine. I use printmaking processes such as lithography, silkscreen, and cyanotype as tools to combine and overlay the past and present of specific places. With these multilayered images, I seek opportunities to examine how the histories of public spaces influence the perception and identity of communities. Prints in A Collecting Place focus on a particular camera obscura in Edinburgh, Scotland, and overlay on-site drawings of architectural motifs, quotes from newspaper clippings, statements overheard in the attraction, and elements from over 150 years of printed ephemera.

In 19th-century United States and Great Britain, camera obscura attractions combined education and amusement as tourist attractions and educational centers. Many illustrated local history through observation and artifacts. At a time when exhibition-goers were often treated as passive receivers, these spaces encouraged viewers to point the viewing “eye” of the camera, and thus gaze outward on an unsuspecting world. The privileged space within the camera obscura offered a promise of control – there, visitors could observe and interpret their surroundings in a private and unimpeded way. During this era, Edinburgh’s camera obscura attraction manifested a philosophy inspired by a concern that seems especially relevant today: that as technology threatens to decentralize communities, a regional museum-observatory could present its collections in such a way as to define and uphold a community’s sense of place.

A Collecting Place represents a new direction for my creative practice, as it is the first to combine on-site research with working in the shared space of a local printmaking studio. In June and July 2016, I conducted research in Edinburgh, gathering source materials through research and interviews at the Camera Obscura site. I produced several of the prints in the exhibition at the city’s premiere printmaking studio, Edinburgh Printmakers. With print processes like cyanotype and lithography, I am able to superimpose layers of historical and contemporary artifacts related to the site. The resulting intersections and serendipitous relationships between these material artifacts of past and present may reveal further questions regarding issues of surveillance and cultural preservation. My intention is to facilitate conversations about the relationships between people and place. To this end, I propose an interpretation of place in which elements from the past, present, and future are concurrent and vital.

This project was supported by Indiana University Southeast’s Research Support Grant, Improvement of Teaching Grant, and Summer Faculty Fellowship.
1078 Gallery is supported by our members, volunteers, donations, and programming.  Please visit our support page
​for membership and donation options.  All text, images and web pages at 1078gallery.org are copyright 1078 Gallery unless otherwise noted.
E-mail the web team at info@1078gallery.org.   ©2008–2022 • 1078 Gallery — All Rights Reserved.