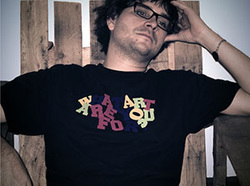 John Baca
Need Need Not Repeat
May 1–24, 2014
Reception: May 1, 5-7pm (talk at 6)
Baca writes: "John Baca grew up in a place that barely ever existed and doesn’t at all anymore. A place where most people spent their time propping things up, knocking them down and dragging them around in the dirt and mud. My work is as much about these things as it is anything else."

John Baca has attended CSU Chico (BFA in sculpture, 2005), CSU Fresno, Rhode Island School of Design (MFA in digital and media, 2007), and Brown University (teaching certificate, 2008). He has had solo shows in Chico and New York City and has been in numerous group shows including ones in Chico; Fresno; Providence, Rhode Island; Copenhagen; Marquette, Nebraska; Pancevo, Serbia; Queens, New York; Albuquerque; Grass Valley; and Manhattan. Baca has held positions in art in Chico, Providence, Albuquerque, and Florence, Italy. Since 2008, he has been an instructional technician in art, applied art and design, and photo at Sierra College. Baca served as the juror for the 1078's Wanted: Wall Work (2010), whose selected

1078 Gallery is supported by our members, volunteers, donations, and programming.  Please visit our support page
​for membership and donation options.  All text, images and web pages at 1078gallery.org are copyright 1078 Gallery unless otherwise noted.
E-mail the web team at info@1078gallery.org.   ©2008–2022 • 1078 Gallery — All Rights Reserved.